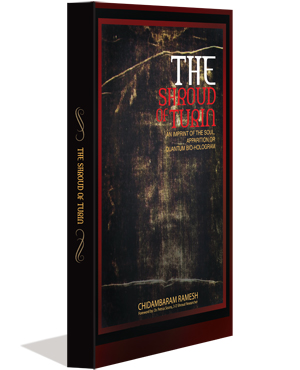 Shroud of Turin – an Imprint of the Soul, Apparition or Quantum Bio-hologram

The Shroud of Turin is a linen cloth bearing the faded image of a man who appears to have undergone physical torture consistent with Roman crucifixion. The Shroud is preserved in the St. John Cathedral in Turin, Italy. It is widely believed to have wrapped the body of historical Jesus of Nazareth and has become one of the most perplexing enigmas for the researchers. The author has attempted to explain the scientific causes of the image on the Shroud under the realm of quantum physics. By drawing a plethora of evidence from the alchemical secrets of resuscitating spectral plant out of ashes, the author establishes that material body of organisms even if consumed to ashes, retain their selfsame form and figure. Even parts of the body like blood, skin, etc. are capable of forming the 3D geometrical structure of the host organism in its entirety, which is a quantum hologram in modern scientific terminology.