BOSE: The Computer Entity Who Became Commander in Chief 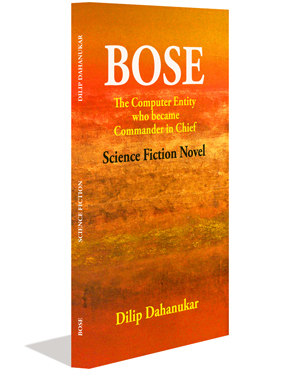 Computer Entity who became the Commander in Chief of the Army.

About the Book
Computer Entity who became the Commander in Chief of the Army. How did they train Iters; the inanimate soldiers? How did the Iters distinguish between friend and foe? How did the Iters eliminate the terrorists? What was the human response to AI Bose? You will find the answers in Bose
Ajit Thakoor an army engineer, designed the Iter army consisting of Idog, Igle and Imos. They were armed fighting units. The Mission Commander (MCO) Controlled a brigade. The Iter Commander was a super computer modeled after Netaji a historical leader in India and called him General Bose. The Iter army proved its merit in Operation Dogbite when it took out the 25 Tmen as they infiltrated into their territory. In the operation Bose obtained a vital mobile phone-tap program. soon Iter army was expanded to man the entire border of the country. All the MCOs reported to Bose and he talked through them to their human counterparts, the army Colonels. Bose extended his units to civilian security through Iters designed for city use; called the Iterys. Bose with his phone tapping capacity through the Iterys soon began to collect massive information much of it classified from the important people in the country. Bose was asked to use the Iters to liberate sialcot which was seized by the terrorists in Pakistan. He did a fine job and was praised by the PM. But in his short talk on the radio, the people realized that he had the voice of Netaji, their beloved leader. The PM felt threatened and wanted to deactivate him but hesitated due to his popularity.
Did Bose Survive? Where did Ajit disappear? Read Bose to find out. It’s peep in the future. Don’t you want to know where the computer will take us?
About the Author
The author Dilip Dahanukar studied engineering in India and Management in the USA. He has rich experience in corporate management and finance. He has written books on national planning (India). His imagination of computer possibilities has resulted in this book. Married to an artist (painter) he has 2 daughters both married, one of them residing in the US. He loves gardens and plants and spends his weekends in his forest-garden abode in the hills in India. 88p/Paperback