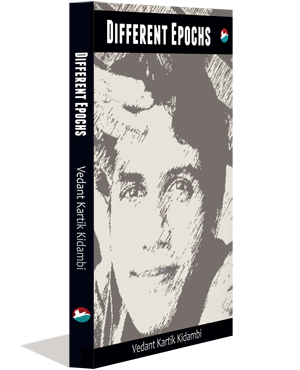 The mind is a very strange entity. Though it is a part of the body of the organism, its location in the body can never be pinpointed…

About the Book
The mind is a very strange entity. Though it is a part of the body of the organism, its location in the body can never be pinpointed… …the mind does not need the brain to exist.’ An epic battle fought in far out space for possession of Earth. A battle spanning galaxies and aeons involving a warrior monk and his chosen pupil pitted against a rebel warlord backed by an opportunistic, alien race. A saga laced with the mind-matter, real-illusory conundrum, the stuff of dreams, the eternal quest… It is a story of explorations beyond the bounds of normal consciousness. A story also of love blossoming across the galactic divide – a divide not so much of distance but in an evolutionary, technological sense, in the very thought processes of humans.
About the Author
Vedant Kartik Kidambi was born in Hyderabad, India, on 12th November 1984. He is an alumnus of the International Institute of Information Technology, also in Hyderabad, India, from 2008 to 2010 where he was pursuing MS by Research in Cognitive Science, AI. He started writing ‘Different Epochs’ when he was around seventeen and completed it when barely into his twenties. After an attempt at getting it published in 2005, he had to let it rest on the backburner, caught up as he was in the maelstrom of undergraduate education. It was again taken up for publication after his untimely demise in a motorbike accident in October 2010, at twenty five.
232p/Paperback/5.83×8.27″