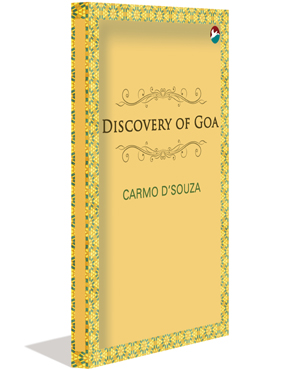 This book is, in a nutshell, a minuscule capsule of myths, legends, facts and fiction, imaginatively placed before the reader.

About the Book
Goa – a heavenly retreat, was reclaimed from the sea by the wheezing arrow of Lord Parashurama. The place served as a temporary Kailash for Lord Shiva. A land blessed with a milky Dudhsagar, whose waters danced to the lilting tunes of Lord Krishna.  A land that sheltered the Pandavas. The shores of which beckoned the “Caravelas”, the missionaries, sailors and soldiers. A meeting place – for the East and the West. Discovery of Goa is, in a nutshell, a minuscule capsule of myths, legends, facts and fiction, imaginatively placed before the reader.
The book is a compilation of articles that were first serialized in the Gomantak Times newspaper. To this set of articles, the author has added those that appeared in the O Heraldo and Navhind Times newspapers. The material was generally obtained from archives and libraries, mostly by chance and accident. An approach of scientific research was abandoned while penning these articles; on the contrary, full liberty was taken by the author to boost up ‘his personal image of Goa’. Hence an accuracy of research is not claimed with respect to the book. The compilation is also not exhaustive or representative of all sections of the society. The book is, therefore, a loose compendium on Goa.
Discovery of Goa borders on nostalgia for those who were associated with the process, is fascinating to those who would like to know more about it, and motivating to the intelligent researcher who cares to shuffle the pages of dusty history – an immense wealth stacked in Goan libraries.
About the Author
Carmo D’Souza, began his career as an assistant school teacher in 1973 and retired as Professor of Law in 2011. He has authored several books on law as well as of fiction. He has, along with his brother Dr. Anthony D’Souza, co-edited ‘World Constitutionalism‘ (2008) and ‘Civil Law: An Indian Perspective‘ (2009), published by Cambridge Scholars Publishing (U. K.). Presently he is Hon. Director of Ismilda Research Consultancy (www.ismildaresearch.com). He is also a recognized guide for Ph. D. (Law) and a visiting Professor at law schools in India.

Carmo D’Souza, a retired professor of law and presently in the Board of Directors of Ismilda research Consultancy worked in the educational field for around four decades. His contact with students enabled him to develop insights into the Goan community. He has authored half a dozen books in law and a similar number in fiction.