Guy on the Sidewalk – A Novel

Home > Books > Guy on the Sidewalk - A Novel 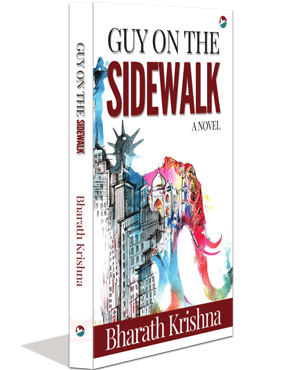 Who am I, where do I belong and what am I meant for in this short life in this big world?

About the Book
Who am I, where do I belong and what am I meant for in this short life in this big world? For Jay, life was a series of defensive detours until he gathered the strength to listen to his inner voice with honesty and decided to take life head on with fearlessness. Making the move from India to America was momentous. He sought to make something of himself, however, his yearning to live in his country and among his people never ceased to bother him. Over six years, despite the luxury of opportunities in the United States, he wondered, is this all there is? He left home to create a better life, but he could have never imagined that though his better life might be found in America, his best life might just be at home, in India.
About the Author
Bharath Krishna’s debut novel, Guy on the Sidewalk, is a reflection of his passion for writing woven through his life like the golden thread of a rare tapestry. As a child, his flair for writing was ever present, but it wasn’t until he started blogging on topics close to his heart that his talent was fully realized and appreciated, which ultimately led to his novel. Bharath’s resume reads like a kaleidoscope of sorts—a bachelor’s degree in agriculture, double master’s degree in management, and years of professional experience in marketing, teaching and IT in India and the United States. To know more about and connect with Bharath Krishna, visit www.BharathKrishna.org.
320p/Paperback/5.5×8.5″
ISBN (EPUB) : 978-93-85523-72-4
ISBN (MOBI) : 978-93-85523-73-1
ISBN (PDF)   : 978-93-85523-74-8