Methods of Analysis in Social Sciences and Research for Peace: An Introduction

Home > Books > Methods of Analysis in Social Sciences and Research for Peace: An Introduction 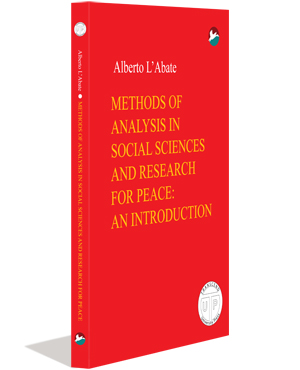 L'Abate leads the reader - passing through the many dilemmas social research comes up against - to four methods of analysis, four basic paradigms: causality, structuralism, functionalism and process analysis.

About the Book
L’Abate leads the reader – passing through the many dilemmas social research comes up against – to four methods of analysis, four basic paradigms: causality, structuralism, functionalism and process analysis.
Many others have followed this path but they inclined to favour strongly one against the others. For L’Abate’s level of mature reflection this type of polarization, well-known in studies on conflict, violence and peace, leads nowhere. All four have merits and demerits, but “if we can see them as particular methods that enrich each other, then we can take considerable steps forward”. Just as in a conflict a little probing will bring out some legitimacy in the positions of all parties, there is some validity in all four of the methods if they are accommodated in a broader, creative methodology. And L’Abate guides us beyond the favorite intellectual pursuit – pointing out the errors and what’s missing – to new and richer horizons. (from the Foreword to this book by Johan Galtung)
Alberto L’Abate, born in Brindisi (Puglia. It.) in 1931, lives in Florence (Italy). He graduated in Social and Political Sciences at Florence University (Italy). He specialised in methods of social research and the relationships between social action, nonviolence and social change at the College Cooperative and the Ecole Pratique des Hautes Etudes in Paris, at the Tavistock Clinic in London, and with Gene Sharp, the so-called Machiavelli of Nonviolence, at Harvard University, Cambridge, U.S.A.. His commitment to better understanding various aspects of nonviolence has not been limited to study and writings, but also put into practice in struggles against nuclear power stations in Tuscany, which contributed to the rejection of the project, and against a missile base in Comiso (Sicily), which was subsequently converted into a civilian airport. He has also been active abroad in an attempt to prevent armed conflicts in the first Gulf War, in Iraq, and as a Peace Ambassador in Kosovo. Though these attempts failed they were very instructive as regards the reasons for war and the possibilities of preventing them. In Italy he has published various books on these subjects and numerous articles, some of which have also been translated into eight languages. The author is on the teaching staff of the “Transcend Peace University” and collaborates with the recently founded Institute in Basel (www.galtung-institut.de). For his writings and engagement in active nonviolence, Alberto has received various awards, both in Italy and abroad.
457p/Paperback/6×9″