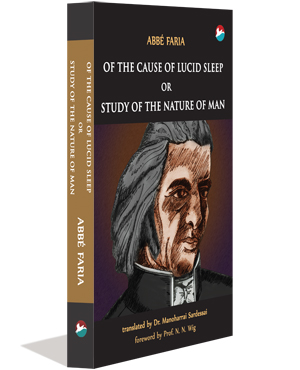 About the Book
“De la cause du Sommeil Lucide ou Etude de la Nature de l’Homme” is the title of a book written by Abbé Faria in 1819. A Goan scholar Dr. D. G. Dalgado reprinted this book in 1906.
The book refutes Mesmer’s hypothesis of animal magnetism and propounds that suggestibility is the basis of hypnotism.
Modern psychiatry began with Mesmerism but Mesmer did not know the science behind it. Abbé Faria discovered it and thus rightfully becomes the pioneer in this field.
However, most Indians and many people around the world are unaware of this fact because Faria wrote his opus in French. French, Portuguese and Russian scientists have dedicated several pages to Faria but American and English books fail to even mention this great pioneer.
Hence, an English translation is a much – needed version to take the original thought in the history of modern psychiatry to the world psychiatrists in particular and the medical fraternity and reading community in general.
The book is translated by Dr. Manoharrai Sardessai foreword by Prof. N. N. Wig
About the Author
Abbe Faria: Doctor of theology and philosophy member of the medical society of marseilles ex-professor of philosophy at the university of France.
392p/Paperback/5.5×8.5″